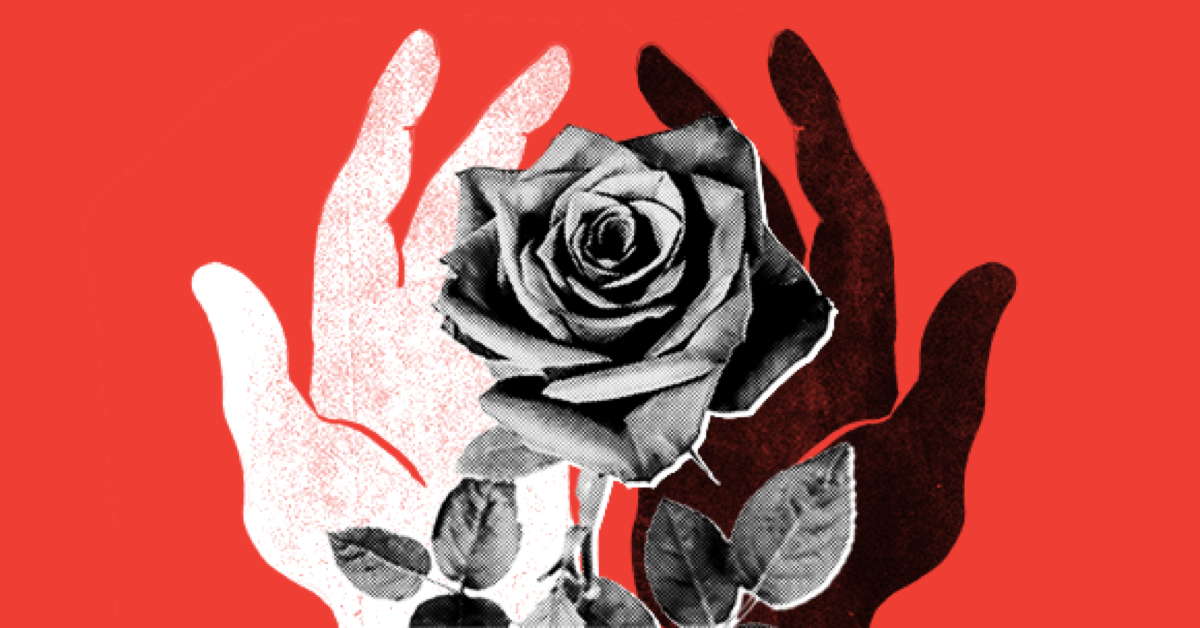 They are some of the most talented and experienced organizers in DSA, and we’re so happy for them to introduce themselves to you below.

We’re also releasing a sneak peek of the political priorities we as Bread & Roses and Marianela, Marsha, Megan, Natalie, and Rachel will be supporting at the national convention and on the NPC. We are prioritizing five areas of political work.

If you support these ideas, please sign on to support our slate at the national convention! And to see the convention resolutions Bread & Roses has officially endorsed so far, click here!

In 2002, at the height of the economic crisis in Argentina, my dad got an ultimatum from his boss: move to the U.S., or lose his contract. For a 40-year-old with no college degree, it wasn’t much of a choice. My family’s forced migration to a rural West Tennessee town radicalized me, as did the student movement in Chile, where I lived and worked in the early 2010s.

I joined DSA in late 2016, after a year as a member of UAW 2865, where I led my unit’s first organizing committee and helped to bring the unit to majority for the first time in almost 10 years. I was later hired as a staffer for UAW 2865, an experience that solidified my commitment to the rank-and-file strategy. At the same time, I was also organizing for East Bay DSA’s single-payer campaign, contributing to creating many of the materials used today in DSA’s national Medicare for All campaign.

I moved to Chicago in late 2017, where I served as secretary of Chicago DSA through April of 2018, working alongside comrades to update and streamline our communications and records systems, as well as helping to kick off our involvement in the Lift the Ban campaign for rent control.

In July 2018, I was appointed to fill a vacancy on DSA’s National Political Committee. The reasons I ran then are largely the same as the reasons I’m running now: I believe we’re at a crucial moment for the socialist movement, with great potential to galvanize and organize a multi-racial, working-class movement that will fight oppression and exploitation and build the just world we want and deserve.

As an NPC member, my primary responsibility has been on the National Electoral Committee. Working on the committee, I’ve learned the kinds of needs that chapters have, especially newer and smaller ones. I want to continue to build our electoral strategy at the national level so that we leverage DSA endorsements to support candidates who will draw the lines between the working class and the capitalist class and continue to galvanize a movement of our class for itself.

I’m proud to be running on the Bread & Roses slate because we share a vision of building a mass socialist movement committed to fighting against oppression, and because we share the belief that only action by an organized, powerful working class can bring about such a movement.

In 2000, while studying for a Ph.D. at York University in Canada, I helped organize fellow grad assistants into Canadian Union of Public Employees Local 3903 and then helped lead a strike on a 30,000 student campus for more than 10 weeks. I was one of four daily strike coordinators, tasked with helping run the strike. On any given day I was finding supplies of wood for the fire barrels on the picket lines, protecting rogue pickets from the administration’s wrath, negotiating with the cops when we caused traffic chaos, and more. We won the strike!

After this experience, I dropped out of the Ph.D. program because I wanted to permanently work with the troublemaking wing of the labor movement — so I went to Labor Notes. I was a staff writer in Detroit from 2001–2009. After my daughter Ruby was born in NYC, I became a staff organizer for the Longshore Workers Coalition, the rank-and-file reform caucus in the still mobbed-up International Longshoremen’s Association. I worked with militant longshore workers throughout the East Coast and the South, helping members win office, develop contract campaigns, and develop leadership. In 2014, I joined the staff of the New York State Nurses Association, where I’m now the lead staff representative in the Bronx.

In 2018, I was elected to the Democratic Socialist Labor Commission Steering Committee (DSLC). The DSLC has accomplished a tremendous amount since its revival after the 2017 Convention. While we have grappled with capacity, we collectively and successfully created a brand new national labor commission from scratch. I believe that the work of this first DSLC has generated renewed energy for socialists in the labor movement.

Without democratic, militant working-class institutions, we will not win socialism. I’ve committed my life to growing the troublemaking wing of the labor movement so workers can move into struggle against the boss, and through that process develop a larger political analysis of their task as a class. I’m deeply committed to building a strong DSA to advance this process.

In the East Bay, I have helped to grow a small group of committed activists into a chapter with more than 1,000 members. Much of this growth was facilitated by a year-long focus on the California Single Payer campaign. This campaign allowed members (including me!) to grow into leaders of the chapter. It taught me and many others how to talk to our neighbors about universal demands and articulate the importance of reforms that attack the power of the capitalist class directly. And we learned nuts-and-bolts campaign skills that have been invaluable to our growth as organizers.

As a member of the East Bay Steering Committee over the last year, I supported the Jovanka Beckles for State Assembly campaign, East Bay DSA’s efforts to support the Oakland Teachers Strike — including a brief stint working on the incredible Bread for Ed effort to feed students during the strike — and the growth of our Social Housing committee, which participated in a statewide campaign to repeal a law limiting rent control.

As a member of the DSA Medicare for All Steering Committee, I have worked closely with other members of the Organizing Subcommittee to facilitate the launch of the national campaign’s Regional Organizer Program, organize our M4A Chapter Activist Training calls, and create our organizing guide and other campaign materials. I’ve also worked on organizing our national weekends of action and planned two regional speaking tours with Michael Lighty. The program now supports 11 volunteer member Regional Organizers all over the US.

Major campaigns like Bernie Sanders, Medicare for All, and the Green New Deal have the potential to galvanize millions of working class people through struggles against the capitalist class. DSA can play a major part in that process, but only if we successfully build off the structures we’ve built and our amazing wins from the last two years. We need to bring more people — especially working-class people and people of color — into our organization, we need to develop our organizing capacity both on a local and national level, and we need to build strong coalitions with progressive and working-class forces to fight for these mass demands. I believe we can do it, and I’m thrilled to be running to be on the NPC to help that happen at a national level.

After joining DSA in 2013, I served in leadership of the Philadelphia chapter from 2014–2017, first as Events Coordinator, and later as Chair through the height of the Bernie Sanders campaign. In my time as a chapter leader, I led a series of Political Revolution 101 events to encourage Bernie supporters to join DSA and organized a Socialist Convergence and Socialist Caucus event during the DNC. Following the primary and the Trump bump in 2016, I was part of a group of leaders in Philly who supported launching a Medicare for All campaign to channel the new energy in our chapter into action and later, supported Medicare for All at our 2017 Convention as a national priority for DSA.

In my time in DSA, I’ve been involved with my chapter’s Abolish Student Debt, 15 Now, Bernie, and M4A campaigns. I’ve also provided strike and picket support for numerous unions in Philadelphia, including PASNAP nurses, SEPTA workers in TWU Local 234, faculty in APSCUF and TAUP, and UPS workers at Teamsters Local 623.

As a national leader of DSA elected to the NPC in August 2017, I’ve served on the NPC’s Steering Committee, the Personnel Committee, and have chaired the Fundraising & Development Committee as well as the Convention Planning Committee. Some of the decisions I’m most proud of making as an NPC member include: endorsing Bernie’s 2020 presidential campaign, supporting our collective bargaining agreement with DSA’s staff union, and sending DSA teachers to provide strike solidarity and build relationships during the West Virginia and UTLA teacher strikes.

I’m running for reelection to the NPC on the Bread & Roses slate because I believe that we have an incredible opportunity through the Bernie 2020 campaign to popularize socialist politics to a mass working class audience. I’m also running because my life was profoundly changed by experiences I had in my first few years in DSA and the labor movement. I think DSA can and should be encouraging the thousands of new members who come to the socialist movement every year to run campaigns in their local area with unions whenever possible, and to take jobs as rank-and-file union members wherever possible. If elected for a second term, I will continue to support the DSLC’s work and prioritize DSA solidarity with workers rebuilding the militant wing of the labor movement.

I became a socialist because I was a feminist first. I began abortion clinic escorting in 2014 in Chicago. Bearing witness to the harassment and abuse ordinary people accessing healthcare are subjected to by the religious right has been the most radicalizing experience of my life, and it led me to socialism. The day after the 2016 election, I joined DSA.

Since then, I’ve been an active member of Chicago DSA. I helped rebuild the Socialist Feminist Working Group here and served as its co-chair. Our working group has prioritized the fight for reproductive justice, and among many other projects has raised over $10,000 for two National Network of Abortion Funds Bowl-A-Thon teams. Our working group has also always highlighted how specific anti-oppression demands go hand-in-hand with the fight for a broader working-class movement. We cannot have one without the other.

I also serve as a Chicago DSA North Side Steering Committee member and representative to our Executive Committee. As a member of the Executive Committee (and as a nonprofit worker in my day job), I am comfortable with making high-level decisions that affect operations, as well as the nuances of refining processes on tight budgets.

I decided to run for NPC because I believe we have a critical opportunity as DSA to build a mass socialist movement that will ultimately turn millions of people into socialists. And I believe that it is critical that we do that by building mass campaigns for demands like Medicare for All and by fighting against the very real forms of racial, national, and gender oppression that working-class people experience every day.

Why DSA’s Next Convention Should Be Held in Person
Ian McClure and Connor Willis
| August 12, 2022
Editors