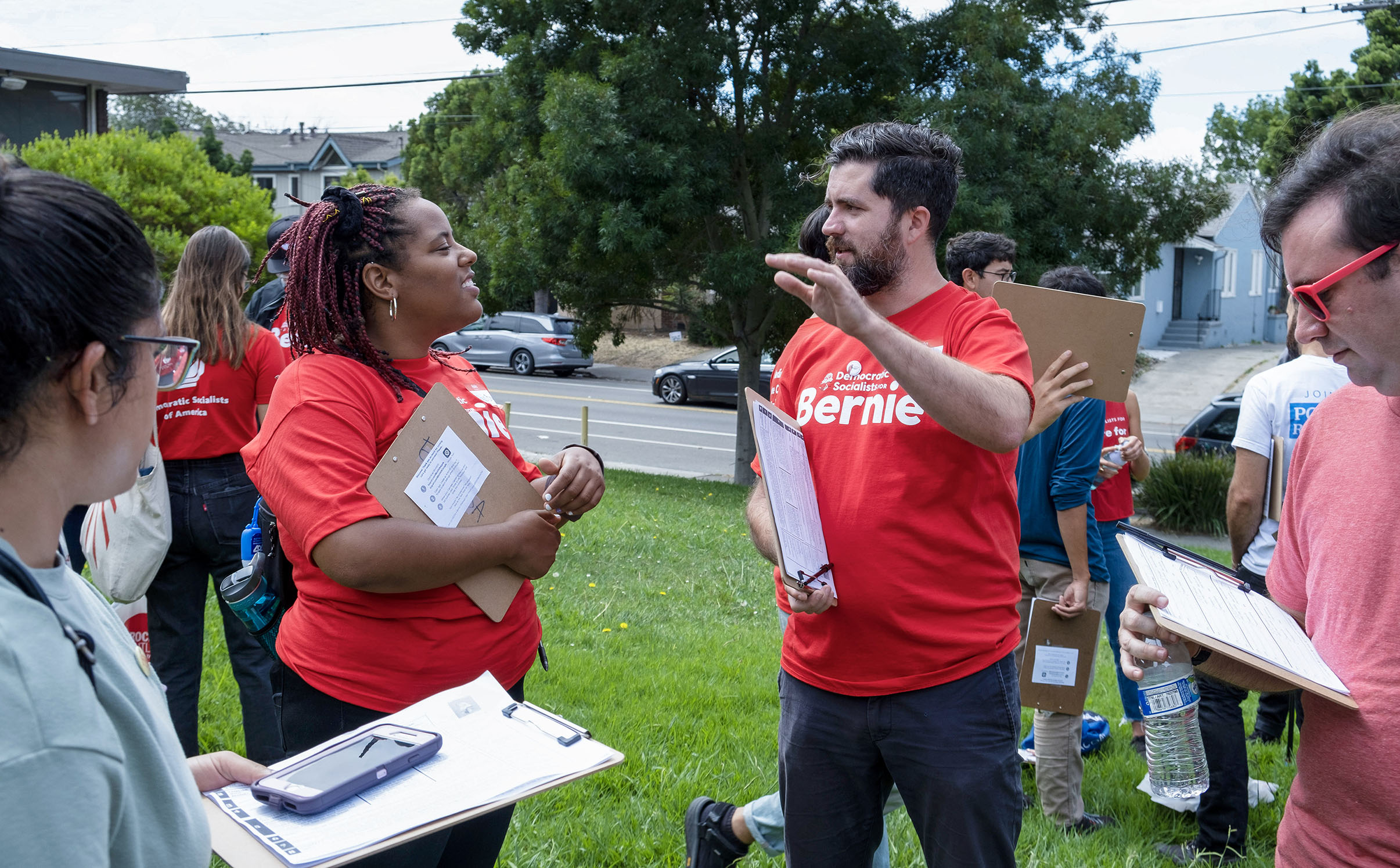 If you like this piece, read more about where we stand and our take on DSA’s tasks for 2019 — and sign up to get our occasional email updates.

The “Pass the Hat” bylaws amendment endorsed by DSA’s Build caucus for the 2019 DSA National Convention looks like a simple solution to a very real problem faced by smaller and newer chapters: a lack of funds to do important projects. The Build caucus describes the concern as serious enough that “many chapters are skeptical of National and see little incentive to stay affiliated.”

The authors explain that this amendment — which would give every DSA chapter with a bank account a $100 monthly stipend — will “rebuild faith in the national organization by creating a real material reason for chapters to stay affiliated and to strengthen bonds with National.” But this reasoning minimizes the value of belonging to a national organization — and assumes far too much about how 150 different chapters see the value of affiliation.

The vast majority of our members value being part of DSA; all our amazing local work and expanding national profile reflect positively on us, our chapters, and DSA as a whole. The national organization is not a third party or outside group to be skeptical of — it’s us.

Ultimately, Pass the Hat will not solve the problems it attempts to because it isn’t calibrated to get at their roots. The Resolution on Grassroots Fundraising and Small Chapter Growth, discussed later, is a stronger alternative.

No Funding for the Chapters That Need It Most

Newer and smaller chapters have real financial limitations. DSA sought to solve this problem by implementing a dues-sharing resolution at the 2017 convention that returns to each local a percentage (currently 20%) of the monthly dues its members have paid. Because implementing this program would be an accounting and budgeting nightmare given that we are an organization of almost 60,000 members who all joined on different dates, the national office opted to implement an option for members to pay national dues monthly and encourage members to switch to that payment plan in order for their chapter to receive a dues share.

Chapter remittances are made quarterly, based on the previous three months of monthly dues received by national DSA. There are two problems with this plan that absolutely need to be corrected.

What would help smaller chapters receive the dues sharing they’re eligible for already is support in setting up organizational bank accounts and in transitioning members to monthly dues. But the Pass the Hat amendment says nothing about such support. It would give $100 stipends to the same approximately 50 chapters with bank accounts that already get dues sharing. The chapters that need funding the most still wouldn’t benefit under Pass the Hat.

One Size Doesn’t Fit All

It’s no secret that larger chapters have more money than smaller chapters, and every extra dollar in its coffers means more to a small chapter than to a large chapter. In economics we’d say smaller chapters have a higher “marginal utility” for each dollar received. It would be a waste of money to redistribute dues in a size-blind manner and give $100 stipends to large chapters, including my own. That’s money better spent in other ways.

Some might argue that larger chapters could just give the stipend payments back to DSA national. Sure, but then it becomes a $1,200 annual expense, which the local executive committee would likely have to approve, creating extra administrative and accounting work sending payments back and forth for no real reason. Why bother?

The Wrong Tool for the Job

DSA’s constitution and bylaws create our governance structure. Bylaws are meant to outline our general organizational structure, membership requirements, and the roles of our elected leadership. Broad rules around dues make sense as part of the bylaws.

Resolutions, on the other hand, describe the actions DSA is to take regarding day-to-day operational activities. Paying chapters a stipend is an operational decision, as is the current dues share program. Resolutions are policies that might need to be changed over time as DSA grows and member and chapter needs change.

Dues sharing is not, as the Build caucus has suggested in its FAQ, spelled out in the bylaws. On dues sharing, the bylaws state only, “The National Convention, or should it not choose to act on this matter, the NPC, shall determine procedures for the collection of dues and contributions and the sharing of same between the Local and National Organizations.” The difference between this and Build’s amendment is that what is currently in the bylaws describes a role the National Political Committee (NPC) or National Convention must fill, while Pass the Hat prescribes a specific program to be enacted.

A serious concern with this bylaws amendment is that it inserts specific operational prescriptions into what is meant to be a dues provision outlined in broad strokes. It will require the NPC to provide a $100 per month or $300 per quarter stipend to every chapter that meets banking criteria and will be much more difficult to change than a resolution — regardless of whether it’s serving its intended purpose, and regardless of DSA’s financial position.

Bylaws are not a place to put budget line-items. If we are going to oblige the organization to spend up to $180,000 per year (150 chapters funded at $1,200 per chapter per year), we should ensure flexibility to address unforeseen consequences and challenges. Pass the Hat binds the hands of future conventions to experiment with dues sharing structures because it has a much higher burden to undo than a resolution does.

We aren’t voting on this proposal in a vacuum. At the convention, we will have a number of dues and funding amendments and resolutions to vote on. Beyond those, we are debating creating several new staff positions, whether to create a number of political education and internal process materials and trainings, whether to develop new priority campaigns (as well as maintaining existing ones), reorganizing the NPC and creating new national decision-making bodies, and investing in organizational tools that will help large and small chapters do their work more effectively.

We need to be looking at not just which amendments and resolutions we think have merits on an individual level but what we want our organization to be able to do in 5, 10, or 20 years. Whatever our politics within the DSA big tent, we need to evaluate the universe of bylaws changes and resolutions before us and vote for the combination of proposals that ensures DSA is able to bring in new members, take on new projects, and grow ever more ambitious in our demands of those in power. There are stronger dues sharing resolutions that take this longer-term view into account.

The best proposal for improving our dues structure is the Resolution on Grassroots Fundraising and Small Chapter Growth put forward by a group of comrades mostly in the Socialist Majority caucus. Their goal is to ensure that smaller and newer chapters have the tools and funding to overcome the hurdles of early phases of chapter development. This resolution seeks to

Rather than approaching dues remittances in a “one-size-fits-all” way, this resolution takes the specific needs of new and small chapters into account, connecting them regionally to larger chapters and their resources and ensuring that they have both the skills and the base of funding to grow to their full potential.

The process proposed by the Grassroots Fundraising amendment will provide material support beyond just $100 per month for all chapters over 25 members, and scale up as chapters grow. It will help organizing committees and smaller chapters connect to DSA nationally and regionally, creating two-way communication, mutual collaboration, and bonds that give locals a sense of connection to DSA’s work beyond their local organizing — which is far better than the one-way relationship of simply paying chapters a monthly allowance. Even better, it encourages chapter leaders to learn new organizing and fundraising skills that will help them grow even more.

The Pass the Hat amendment speaks to a real need without successfully addressing that need. We can address this need in a real way at the convention while keeping all our goals as a national organization balanced: running strategic campaigns, strengthening our administrative capacity so we can grow, and supporting small and new chapters with the resources they need to be part of DSA.

Instead of cobbling together a bunch of ideas that sound good at the convention, let’s build our organization intentionally by investing our limited capital in

Why DSA’s Next Convention Should Be Held in Person
Ian McClure and Connor Willis
| August 12, 2022
Amy Price

Amy Price is on the steering committee of the Chicago DSA's Labor Working Group. She is beginning an IBEW apprenticeship to become an electrician and is a member of DSA's Bread & Roses caucus.