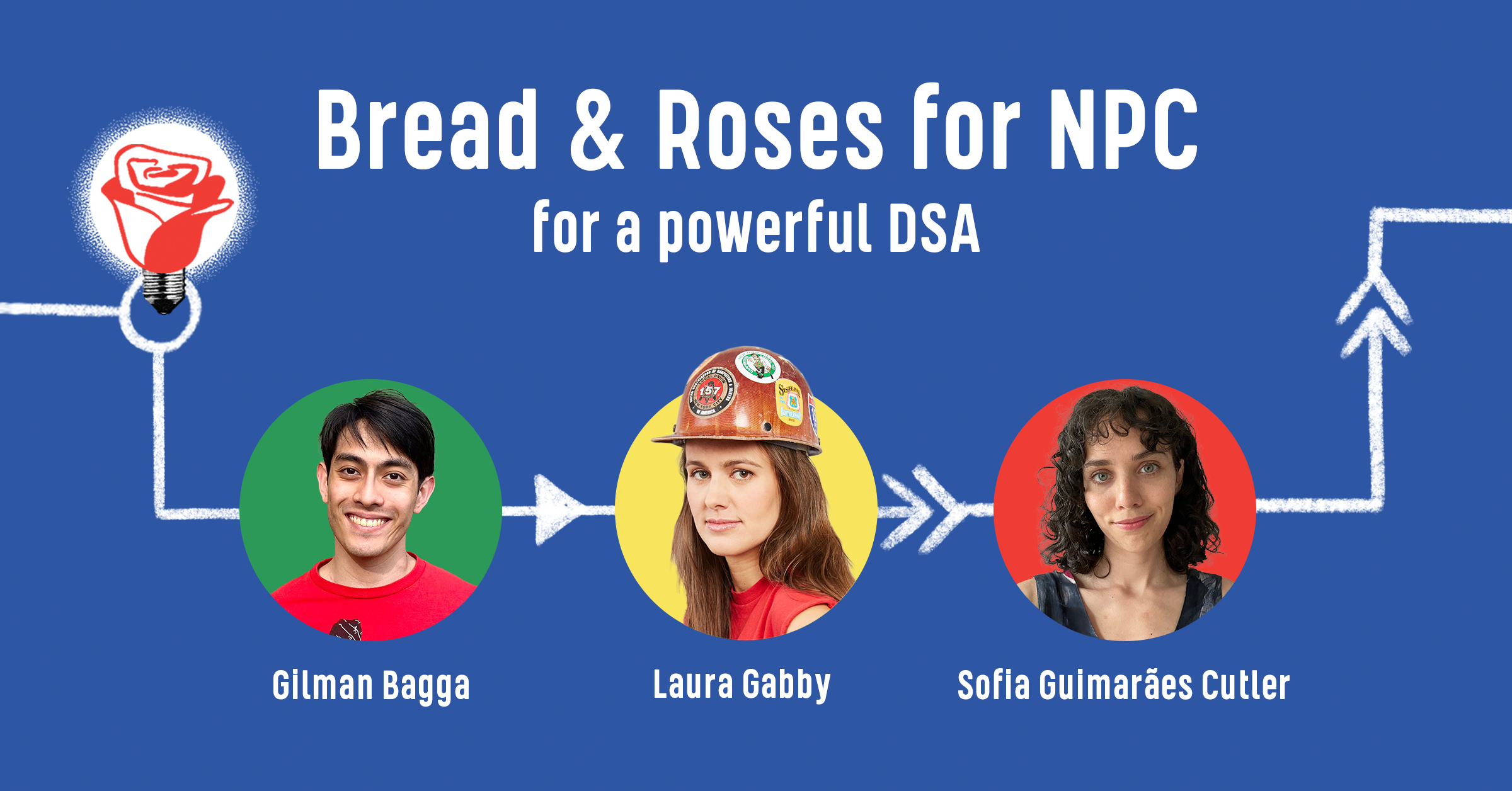 The Bread and Roses caucus is excited to introduce our slate for the 2021 National DSA convention: Sofia Guimarães Cutler, Gilman Bagga and Laura Gabby! Laura comes from one of the largest chapters in New York City, while Sofia and Gilman hail from smaller chapters in North New Jersey and Louisville.

While we come from different locations and are involved in distinct organizing projects, we each believe, to quote Marx, that “the emancipation of the working class must be the act of the working class itself.” We center the working class as the agent of change in all the work we do, and our work focuses on winning material gains and building working class power to fight for themselves. From Laura’s rank-and-file organizing in her carpenter’s unions, to Sofia’s work building up an independent chapter electoral campaign to elect longtime chapter member Joel Brooks to city council in Jersey City, to Gilman’s work recruiting and building chapter infrastructure in Louisville — all of our work focuses on building the organization and self-activity of the multiracial working class.

Building this power means prioritizing the workplace and the state as key terrains of struggle while developing DSA into a tribune for socialism. History has shown us that labor and electoral organizing are two strategic ways to conduct winnable campaigns, advocate socialist politics, and build working-class power to take on bigger campaigns in the future. In order to achieve this, we will also need to strengthen National DSA’s ability to support, lead and have more democratic input from the locals so that chapters can better organize on a national level.

It’s by building rank-and-file power in our unions, launching class-struggle election campaigns and bold legislative fights that work in coalition with the labor movement, and building a strong DSA that we can win a Green New Deal, the abolition of ICE, Medicare for All, defunding the police, and ultimately socialism.

In 2010, my family’s livelihood was on the line and my father was at risk of being fired. The administration of Newark Public Schools was going after teacher unionists like my father during a period of bipartisan anti-unionism and privatization efforts (spearheaded by then-mayor Cory Booker and President Barack Obama). It was a very uncertain and difficult time for my family who depended on his job. It also made me profoundly disillusioned with politics. Wasn’t the Democratic Party supposed to be the ones advocating for working families like mine? Instead it was a party working in the service of capitalists and undermining unionists in my family both here in Newark but also in Brazil, where my family faced the effects of multiple US-backed coups throughout history.

It was only when I saw Bernie Sanders’ insurgent campaign in 2016 that I knew there was an alternative: democratic socialism. Hearing him speak the language of class struggle lit a fire in me, and I quickly joined my local North New Jersey chapter and threw myself into work. While I have been involved in a variety of work in my chapter — from anti-ICE organizing as the co-point person of our immigrant justice working group to launching our defund the police campaign in response to the summer uprisings — my priority has been electoral organizing. Bernie Sanders taught me the importance of using elections to raise class consciousness and organize the working class. His race along with the recent electoral victories in places such as NYC and Chicago demonstrate that the electoral terrain is central for our struggle to ensure rights such as public housing, immigrant justice, and Medicare for all.

For the last year, I have served as chair of the electoral working group and am leading our campaign to elect our longtime chapter-member Joel Brooks to city council in Jersey City. I worked closely with leaders on the National Electoral Committee as well as the Brooklyn Electoral Working Group to learn from the formidable electoral machines chapters have built around the country. Under my leadership, I helped pivot the chapter away from our previous paper endorsement model to an activist endorsement model, in which our chapter bottom-lines the entire campaign — from communications to field and finance — for a home-grown candidate. It’s been incredible to see the amount of internal infrastructure, skills and leadership this in-house campaign has built, all of which will outlast one election.

Building up independent electoral apparatuses is critical to the kind of party-building we need to not just empower the working class but build independence from the Democratic Party. If elected to the NPC, I would love to help other chapters build independent electoral machines like ours. I’d work with DSA chapters across the country to help them build in-house electoral machines of home-grown, openly socialist members who are committed to not just legislating but building and being tied to our organization.

The socialist movement is our last chance to prevent climate extinction. I became a socialist in 2014 because, among other reasons, it became obvious that my generation can’t survive the climate crisis under capitalism. I began organizing as a teenager, first alongside my classmates, then as a worker and a socialist. I joined DSA and got a job at UPS, where I started talking with coworkers about the “Vote No” campaign against a sellout contract forced on UPS Teamsters. I got a first-hand crash course in class struggle.

Since 2018, I have devoted most of my organizing activity to helping build Louisville DSA. We’ve organized strike solidarity efforts, facilitated political education events, protested against ICE brutality, pressured our Congressman to cosponsor Medicare for All, and canvassed for candidates endorsed by our chapter. We organized an issue campaign to fight against cuts to the local library budget. We faced down intimidation and physical attacks from white supremacists and emerged stronger than ever.

We’re a smaller chapter, but we’ve been able to punch above our weight because we’re part of a strong, national organization. If elected to the National Political Committee, I will work to ensure that every chapter gets the resources and support they need to do successful political work in their communities. I support measures that further develop our electoral and labor strategies, and I’m particularly excited about the proposed resolution to provide matching funds for chapter offices and staff.

As a DSA member I have worn many hats: I canvassed for Bernie Sanders in New Hampshire, I have served as both a co-chair and a treasurer of Louisville DSA, and I was our chapter’s 100K captain as Louisville DSA managed to be one of the ten highest-performing chapters in the 2020 recruitment drive. I want to build on these experiences and strengthen all of DSA.

DSA has grown a lot over the past five years, but we need to honestly and intentionally address areas where we can improve. We need to grow DSA into a force that represents the whole working class. As a queer Asian American, I understand we need a movement that builds solidarity and class consciousness among the multiracial working class in every demographic, every community, and every country in the world. We can build an international socialism that challenges imperialism and threatens capital in the heart of its empire in the United States.

I believe DSA can build a mass party of the workers, independent of the ruling class, and a vehicle for our movement to build real democracy in both the state and the workplace. The task before us is daunting, but necessary for our survival. I ask for your support in building DSA into that powerhouse and look forward to your comradeship in the class struggle for years to come.

In 2007, I got involved in my first political fight. Columbia University had a grand plan to expand into West Harlem, and community organizations and students were fighting back. It turned me into an anti-capitalist. The issue of displacement struck a nerve with me, as my family went through an unwanted move when I was 13 and my dad lost his job.

While we lost this fight, something a mentor said stuck with me: construction workers have the power to stop this development. At the time, I never thought I’d become one.

I spent the next few years working in office jobs, making a low wage while having tons of student debt. I didn’t like the work and couldn’t see spending the rest of my life that way. At the time, I was playing soccer daily with a lot of guys who worked in construction and landscaping — I began to think, maybe I should be doing a physical job like they do! And of course my mentor’s words years earlier replayed in my mind.

I got into an apprenticeship with the Carpenters’ Union and immediately got involved in union life. There was a big fight going on over our next contract, and I was moved by rank-and-file union members organizing and speaking out passionately at our meetings. I grew close to members who wanted a fighting union, and sometimes ran rank-and-file slates for delegate elections and the local Executive Board.

When Trump got elected, one thing it revealed to me was how narrow my activism had become, limited solely to my union. I joined DSA because it seemed past time to connect my work to the fight of the broader working class, and because after Bernie Sanders’ devastating defeat, it was clear that it wasn’t enough to be an anti-capitalist: we needed a movement of people fighting for democratic socialism.

Meeting other labor activists through DSA gave me a theory to understand my activism in my union. I learned about the rank-and-file strategy and it was like a critical puzzle piece falling into place.

I served as NYC-DSA’s secretary for a year after the first Bernie-boom, 2017-18. For the next two years, I was on the Labor Branch Organizing Committee and helped plan meetings, events and panels, organized Labor Notes-style trainings, chaired debates, organized and brought coworkers to solidarity actions and strike support, helped plan Labor for DSA candidate canvasses, and began work implementing a rank-and-file strategy resolution. For the past year, I’ve served on the DSLC and organized educational events, including the Socialists on the Job series, supported our educators’ network, and helped on campaigns including the PRO Act.

I’m running for election to the NPC to strengthen our labor work. We’re building a mass movement, and in the coming years, I believe we will need a fighting labor movement to protect our wins and go beyond what we can win in the electoral arena and through issue-based pressure campaigns alone. I believe our labor work is key to becoming an organization that more fully reflects the working class — by race, by industry, by any measure.