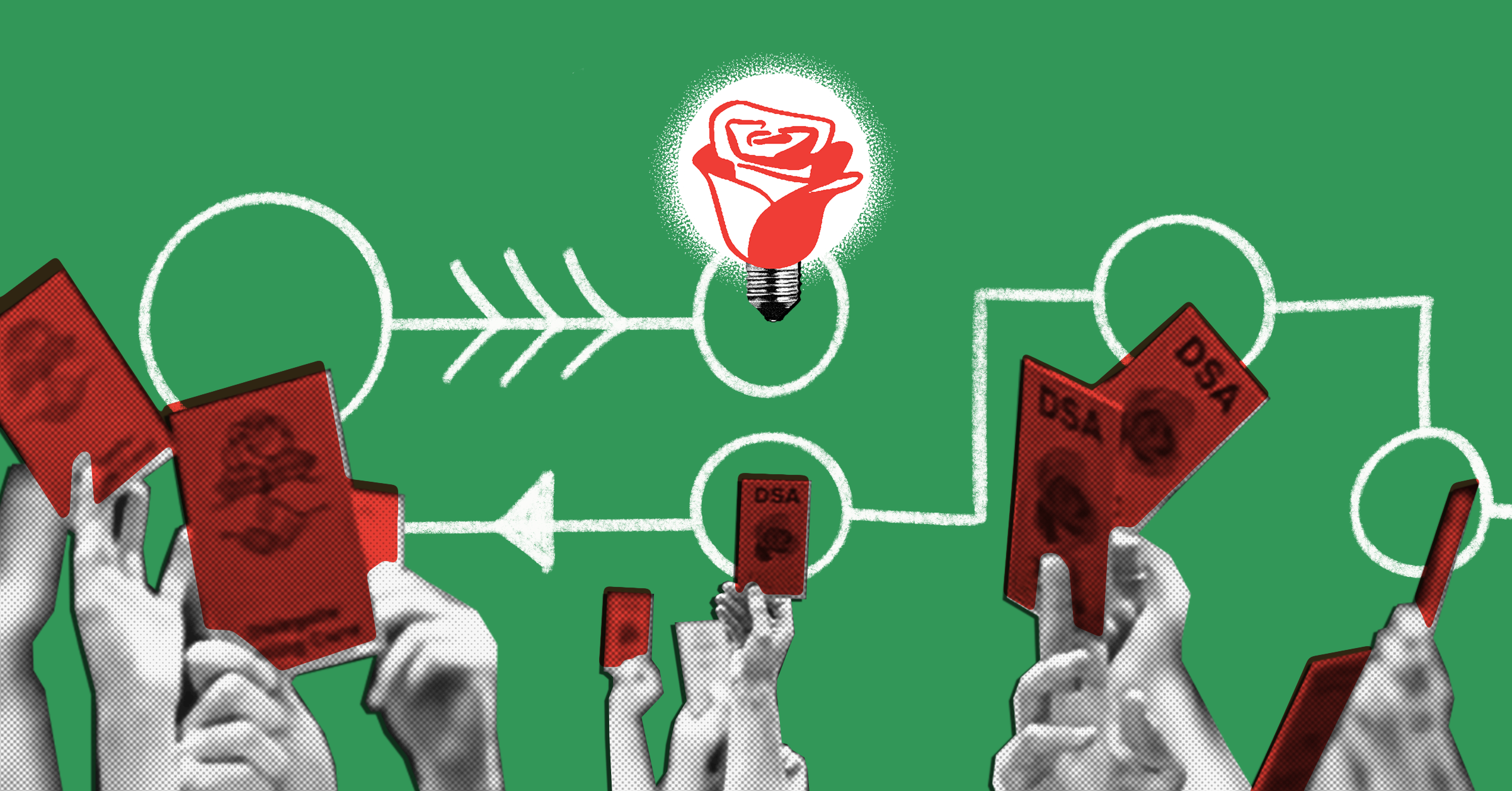 At the upcoming 2021 DSA Convention, DSA members have a major opportunity to direct the future of our organization: do we want to further democratize DSA’s organization and put the right to choose our most powerful office in the hands of the national convention?

The National Director is “responsible for the functioning of the National Office(s) and staff” — in other words, the day-to-day operations of DSA. DSA has a $5 million annual budget. Since the National Director directly oversees and administers staff and other resources on a daily basis, theirs is the most important political role in the organization. In order to democratize our organization and ensure that the will of the membership is steering DSA, DSA’s Bread & Roses caucus has proposed in Constitution/Bylaws Change #4 that we make the role of National Director an elected position.

A recent article by James Jackson and David Duhalde of the Socialist Majority Caucus (SMC) claims that electing the National Director would have the effect of creating a “President for DSA — a single person with an outsized role in shaping the political direction of the organization.” Jackson and Duhalde also argue that electing the National Director will introduce “factionalism” to the position, and that political leadership and administrative leadership should be separate.

But the reality is that we already have a person with an outsized role in shaping DSA’s political direction: the National Director. While the National Political Committee (NPC) is our official elected leadership, on a day-to-day basis they don’t direct DSA’s staff, who play a big role in determining how our democratically-decided priorities are implemented. Because of their close involvement with staff and the budget, the National Director wields a good deal of “soft power” in the form of proposing budgets and advising NPC members about what is practically possible. Many resolutions have passed at past conventions mandating DSA to hire new national organizing staff for example. But only some have been implemented.

These parts of DSA’s operations are often inaccessible to anyone but staff. It’s unreasonable to expect elected volunteer leaders with full-time jobs and other responsibilities to have time to sit in on every staff meeting or closely examine a budget that they have no part in executing. But we should expect that the person who does run DSA on a day-to-day basis is accountable to our membership.

The trouble is the National Director isn’t currently democratically elected by the organization’s highest governing body, the biennial national convention.

It is true that the NPC technically has the power to fire the National Director and hire a new one. But firing someone is an extreme and disruptive form of accountability. More importantly, the ability to fire and hire gives our elected leaders very little direct control over the staff or budget on a day-to-day basis, which will likely remain mostly opaque and inaccessible to volunteers no matter who the National Director is. Instead of being stuck with the blunt, negative accountability of firing, members should be able to positively set a political vision for DSA by choosing our National Director.

The National Director’s choices have huge implications for whether and how DSA’s political priorities are carried out. This shouldn’t come as a surprise: of course running the largest socialist organization in the U.S. requires making important political decisions on a daily basis. It’s impossible to entirely separate administrative and political leadership. Pretending that the National Director isn’t already a political position with an outsized role, as Jackson and Duhalde do, just means insulating the National Director, the staff, and DSA’s $5 million budget from democratic accountability.

The volunteer labor and member input that create DSA’s democratic culture make us a special organization. We are not an NGO. We are a political organization in which power is supposed to rest in the hands of the membership. If, over time, DSA members realize that our collective convention decisions do not steer our organization, they will value convention less and less, and the quality of DSA’s democratic practices will decline. But conventions should be where members from every chapter gather to debate the future of the socialist movement.

Imagine a DSA that hires more full-time field organizers who can travel to help build DSA and YDSA chapters year-round. These organizers can help us massively scale up our labor organizing, electoral work, and communications. They can help recruit and train members to organize in their workplaces and unions and develop networks of rank-and-file socialist activists. They can help to run independent DSA candidates and grow proto-party organizations. And they can help build a mass communications operation to reach millions of people with socialist ideas. Not only would we be accomplishing more, but the dynamism of our campaigns and media would recruit new members and inspire old members to contribute more.

To fulfill this vision, DSA will need elected leaders and a National Director committed to growing and spending our resources on organizing. Holding elections for our organization’s most powerful position will allow members to select a future National Director on the basis of how they think DSA should use its considerable resources.

Today is a unique time for democratic socialism. Our movement is still growing and claiming victories despite the setbacks of the last year. We’ve done a lot with the little we have so far, but we can do so much more. We can fight capitalism with a truly democratic organization that spurs class struggle across the country. Delegates can make the choice for a fully member-run organization at next month’s convention by voting YES on Constitutional/Bylaws Change #4: Electing DSA’s National Director.

Griffin Mahon is an at-large DSA member from Virginia and a member of DSA’s Bread & Roses caucus. He serves on DSA’s National Political Education Committee and was previously an editor for YDSA’s publication The Activist.