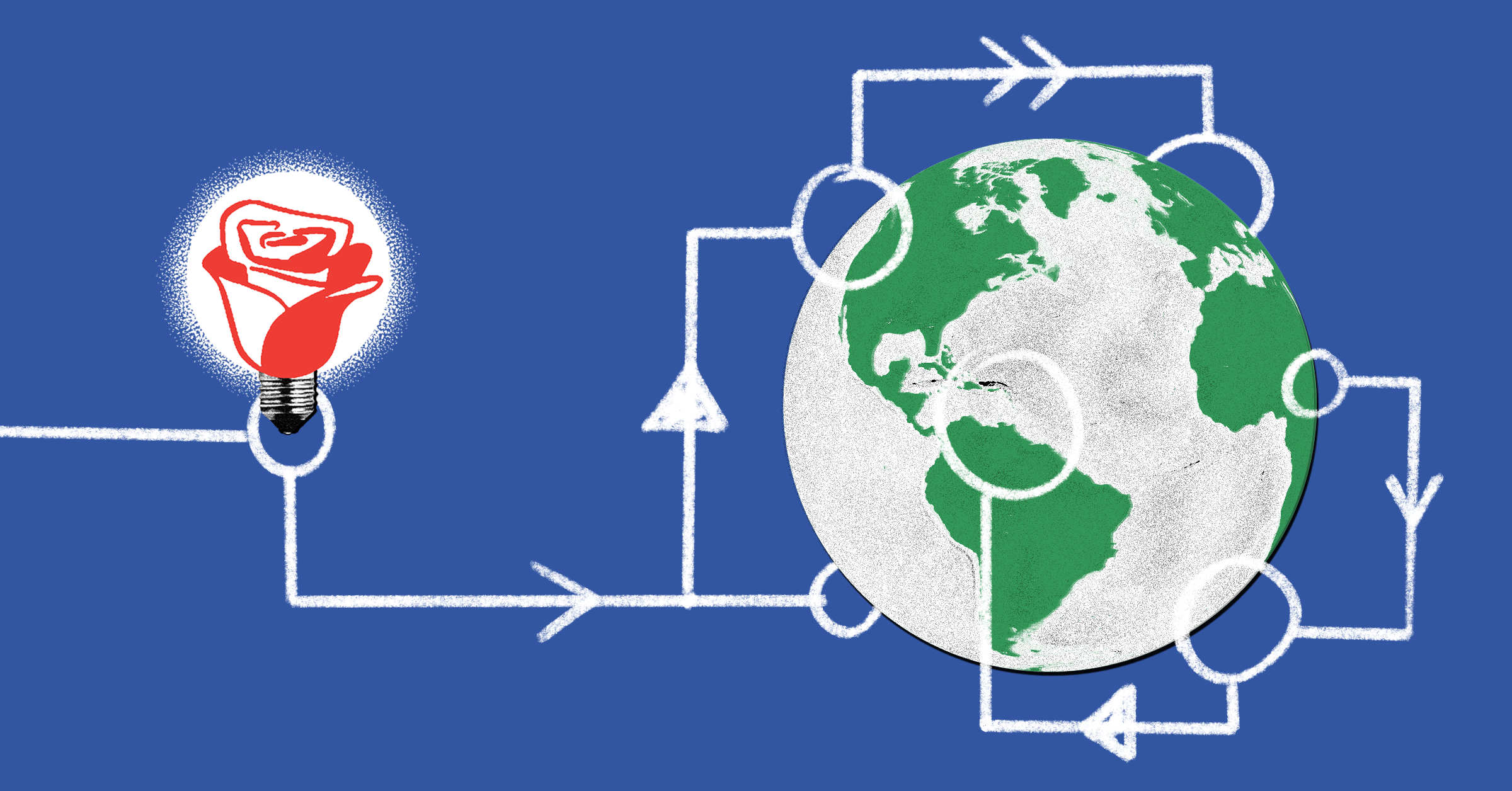 DSA’s Bread & Roses caucus urges delegates to the 2021 DSA National Convention to take Resolution #14, “Committing to International Socialist Solidarity,” off of the convention’s consent agenda and to vote it down.

The past couple years have seen a dramatic increase in DSA’s international solidarity and educational efforts, including the creation of a sprawling internationalism committee with more regional and thematic subcommittees than I can keep track of, and the forging of new ties with sister organizations and social movements around the world. It is truly exciting to see so many DSA members connecting the dots between DSA’s domestic and international agendas, and committing themselves to internationalism.

Yet in DSA we have never had a meaningful, open debate about what our internationalist principles should be. The organization’s most recent general statement of international principles, approved at the 2015 national convention, says, little more than “DSA will stand in solidarity with movements around the world fighting to raise global labor, environmental, and human rights standards,” but remains silent on a host of key strategic and tactical issues. The 2019 national convention approved a resolution committing DSA to establish “relations with socialist and working class organizations in Mexico, Puerto Rico, Canada, Brazil, The Caribbean, and Latin America broadly, especially those with a genuinely mass character” (Resolution #4), a resolution mandating the creation of a Palestine Solidarity Working Group (Resolution #35), a general commitment to the politics of “Decolonization, Self-Determination, and Anti-Imperialism” (Resolution #50), and an ambiguously worded resolution committing DSA to “solidarity with the Cuban socialist struggle” (Resolution #62).

Most of these commitments, however, were either general or vague enough to be unobjectionable to most DSA members, or, as in the case of Resolution #62, were hastily pushed through the convention as a package of related resolutions with virtually no debate, or even understanding by most delegates. At no point has DSA had an open debate about the principles that should guide our internationalist work, or the standards we should use to decide which international organizations merit deeper organizational ties.

Only one substantive resolution on DSA and internationalism received enough support to warrant consideration at the 2021 convention, Resolution #14. This resolution follows in the footsteps of 2019’s Resolution #4. It commits DSA to joining the São Paolo Forum and reiterates the organization’s previously stated commitment to building relationships with “mass parties” in Latin America (which, as in 2019’s Resolution #4, remain undefined in 2021’s Resolution #14).

Resolution #14 offers an excellent opportunity for DSAers with contrasting perspectives on our broad conception of international work to finally have an open debate about a range of key questions such as what we mean by “mass parties” (and why such parties should be prioritized over social movements, civil society organizations and other important expressions of working-class organization); what, if any, additional criteria should be used to determine which parties and organizations should be considered our primary allies; and what DSA’s short, medium and long-term objectives in internationalist work might be.

Unfortunately, however, Resolution #14 will not, as present, be debated at the convention, since it has been placed on the consent agenda, meaning that it was considered sufficiently unobjectionable by enough convention delegates that it will be approved without any discussion or debate. Yet only 650 of more than 1,300 delegates actually participated in the process of deciding which items should be placed on the consent agenda, just 34% of all delegates. So we have no idea whether most delegates actually approve of the resolution’s language. As things stand, the 2021 convention is likely to continue in the tradition set by the 2019 convention of making huge decisions about DSA’s internationalist orientation without any debate.

Luckily, as a democratic organization, we have a chance to change course by removing Resolution #14 from the consent agenda. To further explain why this is so important, let me delve into the substance of the resolution. Resolution 14 makes four primary commitments:

The fourth of these is unobjectionable but also unnecessary, as this work already takes place within DSA, and has for years. I will focus on the other three commitments, which have serious implications for DSA and at the very least warrant a serious discussion prior to approval. Commitments 1 and 2 are, in principle, likely unobjectionable to most DSA members. Indeed, they should be lauded to the extent that they attempt to further the important work of building deep and durable networks of relationships with parties and movements in a critical region of the world.

Yet the implications of these commitments are more controversial than they might seem at first glance. With respect to Commitment 1, unless greater clarity is provided about its purpose and goals, this commitment could just as easily lead to constructive efforts aimed at defending the integrity of democratic electoral processes so important to guarantee the political voice of working and poor people throughout Latin America, or to disturbing, anti-democratic efforts aimed at legitimating rigged or highly suspect electoral processes by authoritarian governments in the region.

Regarding Commitment 2, depending on how “mass parties” is interpreted, and how rigidly DSA adheres to forming relationships with political parties versus independent social movements, this commitment could produce a period of new relationship building with potential allies across Latin America that dramatically expands DSA’s capacity to conduct effective internationalist organizing and learn from the diverse experiences of the Latin American Left. Or it might foreclose the possibility of building relationships with important social movements as well as political parties that are not deemed “mass parties.” This would almost certainly include parties of real consequence in the region that take critical perspectives on authoritarian left-wing governments, such as PSOL in Brazil, Nuevo Peru, and Colombia Humana.

For these reasons, DSA convention delegates need a debate about whether Commitments 1 and 2 should be removed from Resolution #14, or at least modified to explicitly include language indicating: 1) that any election observing conducting by DSA is strictly independent of government or party entities (including the financing of DSA members’ travel and lodgings), and must entail unrestricted access to polling locations, and 2) that DSA will build exchange programs with parties representing the full range of political views on the Latin American Left, as well as independent social movements.

Finally, the implications of Commitment 3 are also highly consequential and merit real debate and discussion. The São Paulo Forum was formed in 1990 by the Brazilian Workers’ Party (PT) to bring leftist parties and social movements in Latin America together around a new, shared strategic orientation for the Latin American Left after the end of the Cold War. Today, the forum has around 100 member organizations, including most of the key labor and leftist parties in the region. While once a dynamic space facilitating a shared vision of left-wing politics in Latin America, since the death of Venezuelan President Hugo Chávez in 2013, the organization has experienced deep divisions over its relationship with the government of Venezuelan President Nicolás Maduro. Key leaders of important Forum membership organizations — such as former Uruguayan President Jorge Mujíca — have publicly expressed condemnation of the Maduro government’s abuses of political and civil rights, while other members, including Maduro himself, have sought to ensure the Forum not only stays silent on the political and civil rights abuses of member organizations, but actively defends those organizations, such as the Maduro government in Venezuela and the government of Daniel Ortega in Nicaragua.

At least in part as a response to these tensions, a new regional organization, the Grupo de Puebla, was formed in 2019 by key Forum members as an alternative regional coordinating platform for leaders of left-wing parties, minus Maduro, Ortega, and Cuban President Miguel Díaz-Canel. These leaders range from Argentine President Alberto Fernández and Bolivian President Luis Arce to former Brazilian Presidents Luiz Inácio Lula da Silva and Dilma Rousseff and former Bolivian President Evo Morales, among many others. In other words, the São Paulo Forum is perceived by many of its most important members as being so closely associated with authoritarian governments in Venezuela, Nicaragua, and Cuba that it was necessary to create a parallel organization excluding those governments.

In practice, joining the São Paulo Forum will accomplish little beyond signaling DSA’s ideological alignment with authoritarian governments in Latin America (Venezuela, Cuba, Nicaragua). By formally joining the Forum, we effectively commit DSA to defending our sister organizations (such as the United Socialist Party of Venezuela, the Nicaraguan FSLN, and the Cuban Communist Party), which will make internal political debate around our internationalism work in Latin America even more difficult. There is no clear strategic reason for joining the Forum unless you believe that any critique of authoritarian governments that self-identify as leftist is tantamount to supporting US imperialism or a betrayal of solidarity with our comrades in the Global South.

DSA faces a real choice on internationalist politics: Do we want DSA to uphold the core values of democratic socialism and advocacy for the rights of working and poor people in the Global South? Or do we want support authoritarian governments who systematically violate the basic tenets of democratic socialism, on the theory that most organized leftists in a given country support their authoritarian government, and/or that any critique of a nominally leftist authoritarian government by US leftists inevitable plays into the hands of US imperialism? To me the answer is clearly the former, though leftists of good faith can obviously disagree. At the very least we should have the discussion. To do that, delegates to DSA’s 2021 National Convention should take Resolution #14 off the consent agenda.

Why DSA’s Next Convention Should Be Held in Person
Ian McClure and Connor Willis
| August 12, 2022
Jared Abbott

Jared Abbott is a DSA member, a member of DSA's Bread & Roses caucus, and was a member of DSA’s National Political Committee from 2013 to 2017. He studies democracy and the Left in Latin America.