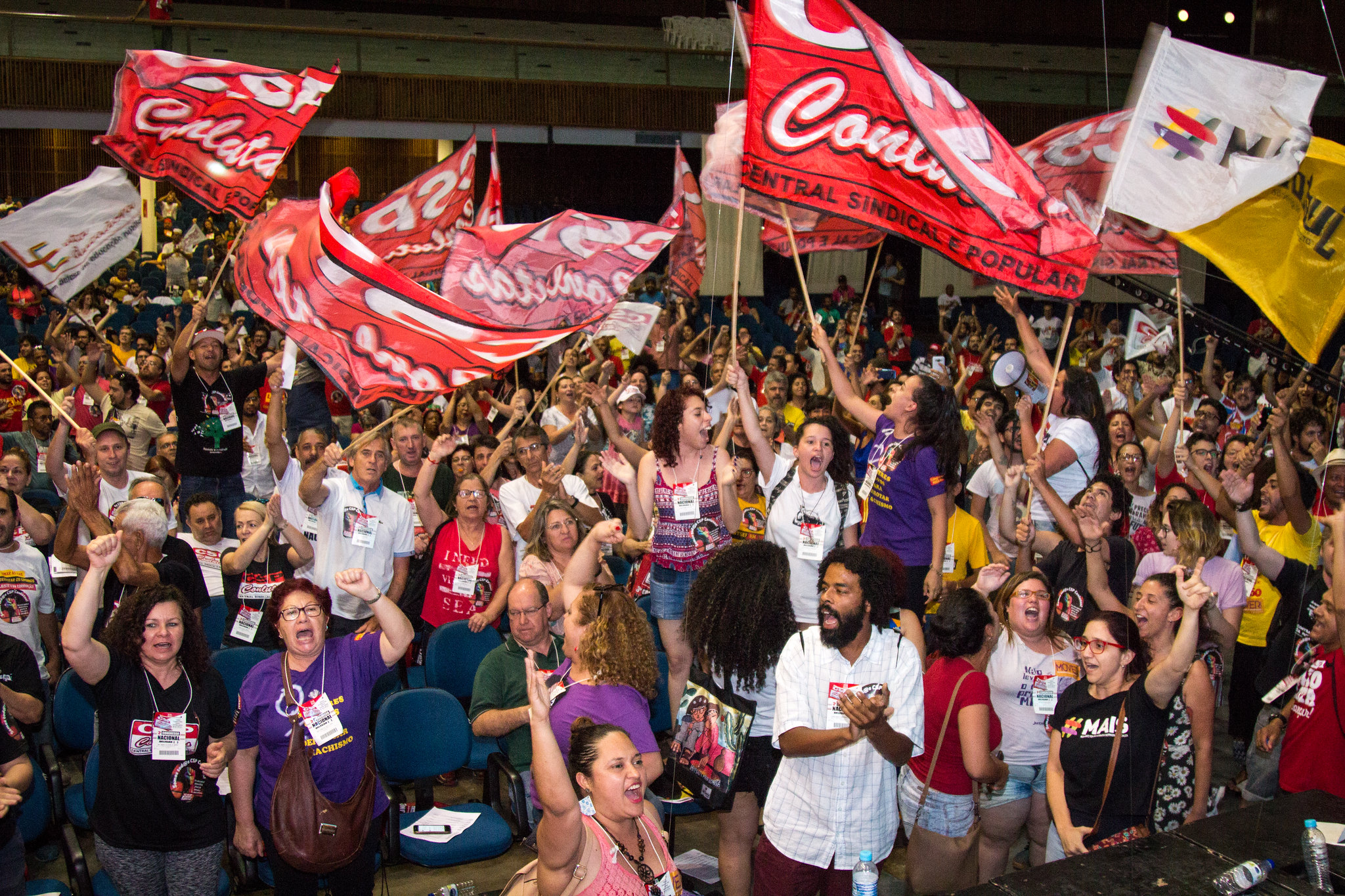 Delegates lead a chant at the 2017 congress of CSP Conlutas, a left-wing union federation in Brazil, by Romerito Pontes / CC BY SA-4.0

For the past five years, thousands of socialists in the U.S. have found inspiration in the rank-and-file strategy: bridging the gap between the socialist movement and the majority of the working class by supporting workers fighting the boss, or better yet, by taking jobs to build fighting unions with our coworkers. DSA recently began officially advocating for this strategy nationwide. Rarely, however, have we looked to how elements of the rank-and-file strategy have worked or struggled abroad.

Brazil’s labor movement, built with participation and leadership by tens of thousands of socialist activists, is a crucial opportunity to see how a parallel rank-and-file strategy has worked at a much larger scale than in the US so far.

Through decades of committed work as union members, Brazilian socialists have built some of their best foundations for party building, class struggle elections, and militant social movements against racism and misogyny. Based on interviews in Brazil this August and September, this article draws lessons from socialists in the country’s militant unions of education, energy, manufacturing, and public transit workers.

On October 31, Brazil’s former president Lula da Silva, of the center-left Workers’ Party, narrowly defeated Brazil’s far-right incumbent Jair Bolsonaro. The surprisingly strong showing for Bolsonaro, the victories of his allies in major downballot races, and rampant police repression of Lula voters showed the troubling depth of the extreme right. While most on the left believe Bolsonaro will not be able to launch a coup, due to lack of elite support, it’s clear he and his allies will attack trust in the results.

The course of labor has immense stakes for democracy in Brazil. Key unions, socialists, and social movements have prepared for strikes and protests to fight a Bolsonaro coup, just in case. They’ve also prepared to pressure Lula’s new government towards the left, to avoid the neoliberal moves that left the last PT governments with weakened labor & social movements to back them up.

The rank-and-file strategy, built out at a much larger scale in Brazil than in the U.S., has worked powerfully to move unions left and to grow a left rooted in a multiracial working class. It’s far from perfect — there’s still a lot of separation to overcome — but Brazil’s lessons deserve our attention.

Brazilian unions should be famous for ending a military dictatorship through years of strikes.

Although students and leftists bravely started open protests earlier, it was a late 1970’s multi-year strike wave in Brazil’s metal, auto, and aerospace factory unions that forced the dictatorship to slowly transition to democracy. These were illegal strikes, defying longstanding laws that allowed only worker organizations that were steered by government agencies.

Lula came to national prominence as a young metalworker and strike leader in this historic wave, and these militant unions became a core of the Workers Party (PT), founded in 1980, along with many rural workers, Catholic activists, students, and urban intellectuals from a broad left.

From the 1980s through the present, most Brazilian unions have continued to affiliate closely with the PT. Tied together through the Unified Workers’ Central (CUT), a labor federation with roughly 7 million affiliated union members and largely disciplined to the PT, this has been an even closer relationship than that of AFL-CIO union brass and the Democratic establishment in the US. Under the PT’s four presidential terms (2003-2015), government and top union officials from the CUT often pushed together to avoid strikes and cut deals with employers, often making wage gains while allowing privatization or deindustrialization to move ahead. Labor peace, or “conciliation,” was the strategy to avoid capital strikes and keep investment flowing. It flowed mightily, with the stock market doing better than ever before under Lula.

The PT governments deserve immense credit for expanding social programs and public universities, making historic gains at reducing extreme poverty and including poorer and Black students in higher education. While these reforms built passionate support for Lula from Brazil’s poorest, and provided fuel for the right to stoke middle class resentment, the social policies brought no conflict with wealthy investors, who profited from expanding consumer markets.

That said, the neoliberal side of Lula and PT government actions shouldn’t be papered over. To keep the capitalist engines stoked, under investor pressure, the PT governments pushed to privatize and outsource major chunks of state companies and oilfields. In 2003, its first year in office, the Lula administration cut public pensions and raised the retirement age for millions of public workers by nearly a decade, to 65. The Economist, neoliberalism’s leading rag, cheered these cuts with glee. Booming investments in mining, oil drilling, and farm exports were boosted by government policy to slash tariffs and subsidies for industrial sectors, leading to harsh job losses for unionized manufacturing.

Those neoliberal moves fractured the Brazilian left, at the very moment it appeared to have won power. PT electeds and activists who spoke out against these moves from the top, particularly the pension cuts, were kicked out of the PT for their opposition, and formed the Party of Socialism and Liberty (PSOL) the next year. PSOL now has over 220,000 members, with 12 federal and 22 state legislators (compared to 1.6 million, 55 and 112 for the PT, respectively). PSOL is a big tent party, with internal “tendencies” providing the main engines of organizing both internally and externally. While the founding PSOL tendencies were weighted towards socialist, Leninist, and Trotskyist groups, an increasing number of more electorally-oriented social democratic tendencies have since joined.

A parallel split, albeit slower, took place in Brazil’s unions. Left currents in unions led sustained protests and occasional strikes against the PT’s neoliberal reforms. New left-wing union federations like Intersindical and CSP-Conlutas split from the PT’s CUT under the Lula presidencies, with support from member and leadership minorities in dozens of industrial and public unions. However, the large majority of union leaders nationwide stayed committed to their government access through the CUT. Closely married to the PT leadership, these unions were hesitant to use strikes against either employers or government, for fear of undermining PT electeds who were under mounting right-wing attack.

In the last decade, socialists started organizing and winning majority support in some crucial unions. Lula’s new government seems likely to face a more independent and militant union movement than before. Even some CUT leaders, like among oil unions, have developed programs and demands they will present to a new PT government, similar to many left-wing union currents.

Here are some left rank & file advances in Brazil’s unions, by sector. Brazilian union leadership is generally based on proportional representation; an internal union caucus/coalition winning 30% of members’ votes gets 30% of seats on the union board.

Socialists have been active for decades in many unions, but only a few small currents described an explicit strategy for recruiting comrades to get jobs in those unions. For most other currents, it seemed to be taken for granted that some socialists would take rank-and-file jobs, without the need for active recruitment. Socialist rank and filers we talked to largely went into union jobs after being activists in socialist student movements (which are vastly larger than in the US), or became union teachers after trying it out as volunteer teachers in the Emancipa popular education network started by MES. Emancipa provides free prep courses for the national college entry exams, along with open-ended political discussions, for high schoolers in poorer, largely Black neighborhoods.

Brazil’s unions reflect the diverse breadth of its organized left, with multiple socialist groups competing internally for leadership in many unions, usually with an entrenched PT-affiliated establishment. Because many wings of Brazil’s left have made a long-term commitment to working in the unions and helping members fight the boss, socialists have succeeded not just at winning union leadership, but a more crucial goal: workers’ movements ready to fight bosses and their government agents. Fifteen years ago, the Brazilian labor movement was poorly organized to pressure its PT allies in government. Now, left leadership of anti-privatization strikes and other shop floor fights has built unions ready to stand their ground and, they hope, even pull the new Lula government left.

The rank-and-file strategy isn’t just about changing unions. It’s a political strategy to make winning socialism possible, based on rooting the left in the working class, across race and other divides. Left activists in Brazil skew whiter and more college-educated/middle class than Brazil as a whole, although closer to national demographics than the US Left. Unions and social movement work are central to how most Black and non-college activists become involved in the left, in the assessments I heard. Alongside unions, social movements around housing (particularly to protect/provide infrastructure for semi-illegal shantytowns), popular and public education efforts like Emancipa, and feminist and anti-racist protests all seem to be important places where left currents have participated deeply, built actions and organization, and recruited new cadres and organizers.

In Rio de Janeiro, the MES current in the teachers’ union brought in crucial new organizers and support (from non-MES or PSOL teachers) for MES social movement and electoral work. The Emancipa popular education program found most of its volunteers from teachers recruited by a MES or existing Emancipa teacher in their union. In turn, Emancipa was key to recruiting organizers to support MES state and federal legislature runs, including for a longtime teacher with the program. These Emancipa and MES teachers were also active, at times, in building broader community discussions and protests against police violence in their neighborhoods.

In Rio Grande do Sul state, teachers and healthcare workers were often described as the key base of activists for MES-PSOL electoral campaigns, particularly in smaller and more rural cities. A movement fight over transit fares and funding, with transport workers and students particularly involved, was the backbone for the breakthrough success of MES-PSOL congresswoman Fernanda Melchionna in 2016.

Organizing as rank & file union members was a common background for many of the Brazilian left’s most prominent, movement-building electoral candidates. Both Melchionna and MES congresswoman Sâmia Bomfim, in São Paulo, began their activism in student socialist and feminist movements, then became unionized public sector workers for years after college. Fighting against austerity attacks on social services and pensions, they sharpened their politics as part of these powerful unions, while building a labor movement more ready to fight for the working class as a whole. Bomfim and Melchionnia shared in depth about these experiences in this interview on class struggle election strategy.

Many Brazilian socialists are pushing to politicize their unions by building internal union debates around electoral endorsements, changing union affiliation to left-aligned or independent union federations, or creating a program of demands for the new Lula government from their sector. Those might give us some ideas on ways to “put politics first” in our unions, building on real rank-and-file concerns.

The rank-and-file strategy the U.S. aims to connect socialists and workers through strike solidarity, cross-union projects like Labor Notes, and building unions and reform caucuses as rank-and-file workers ourselves. It’s not just about socialists changing unions — it’s about how roots in revived unions change the socialist movement itself for the better. Brazil’s socialist left shows how that strategy, at scale, can build the foundation for the fighting unions, social movements, and party building that the U.S. left sorely needs. 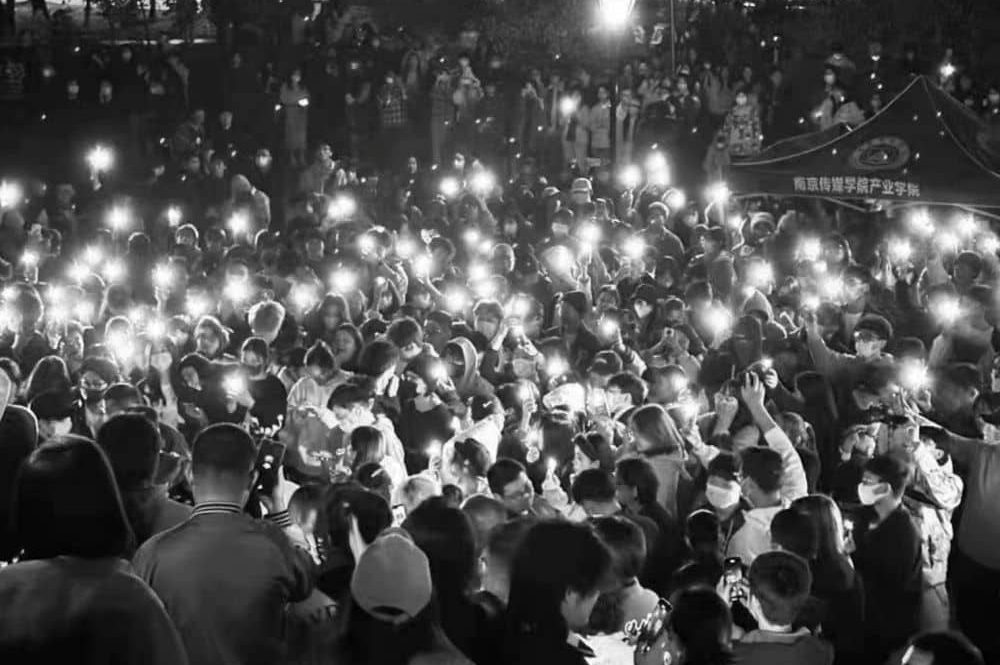 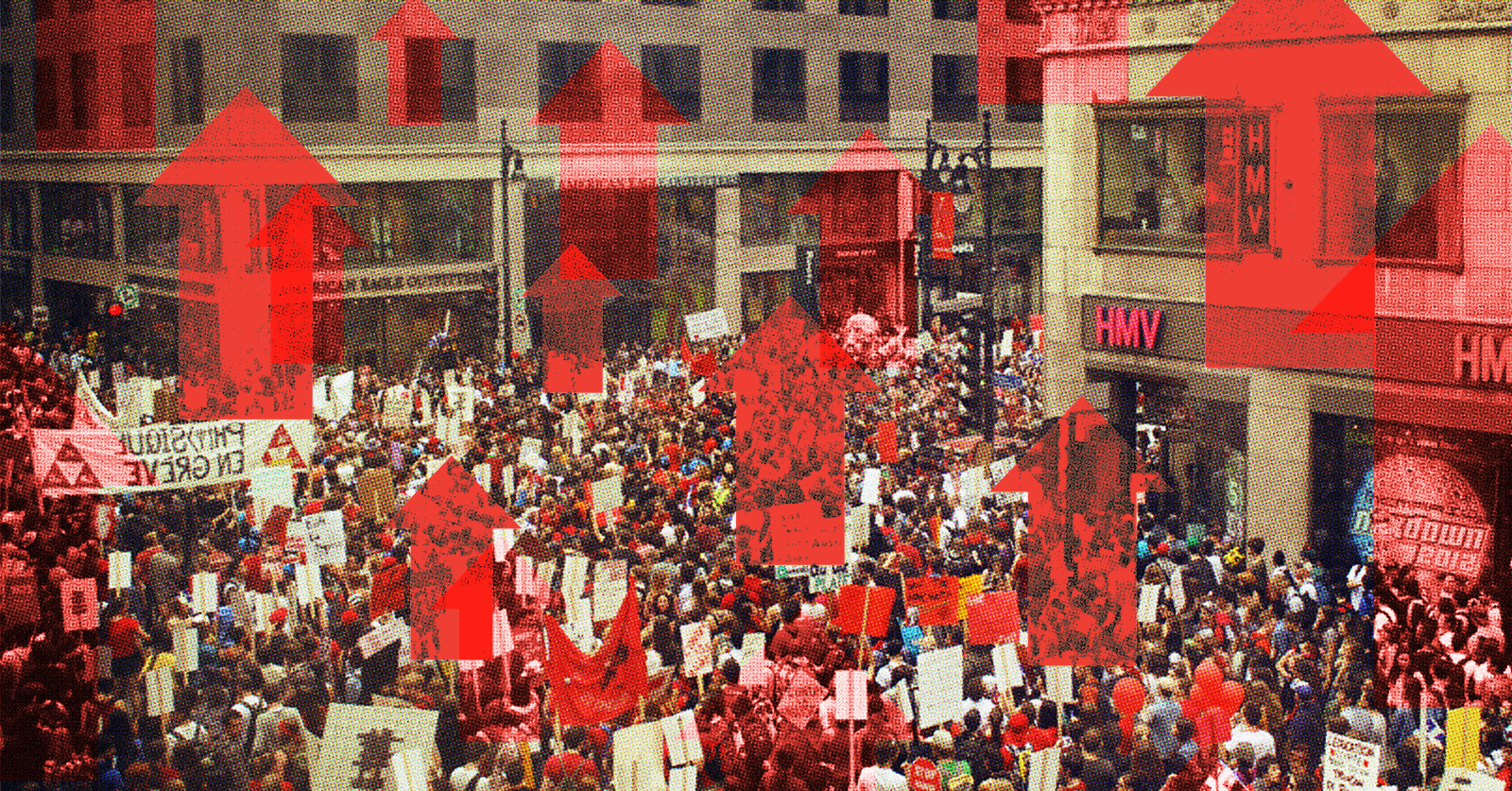 Ten Years After the Québec Student Strike: What a Mass Movement Feels Like
Morganne Blais-McPherson and Peter Lucas
| September 22, 2022 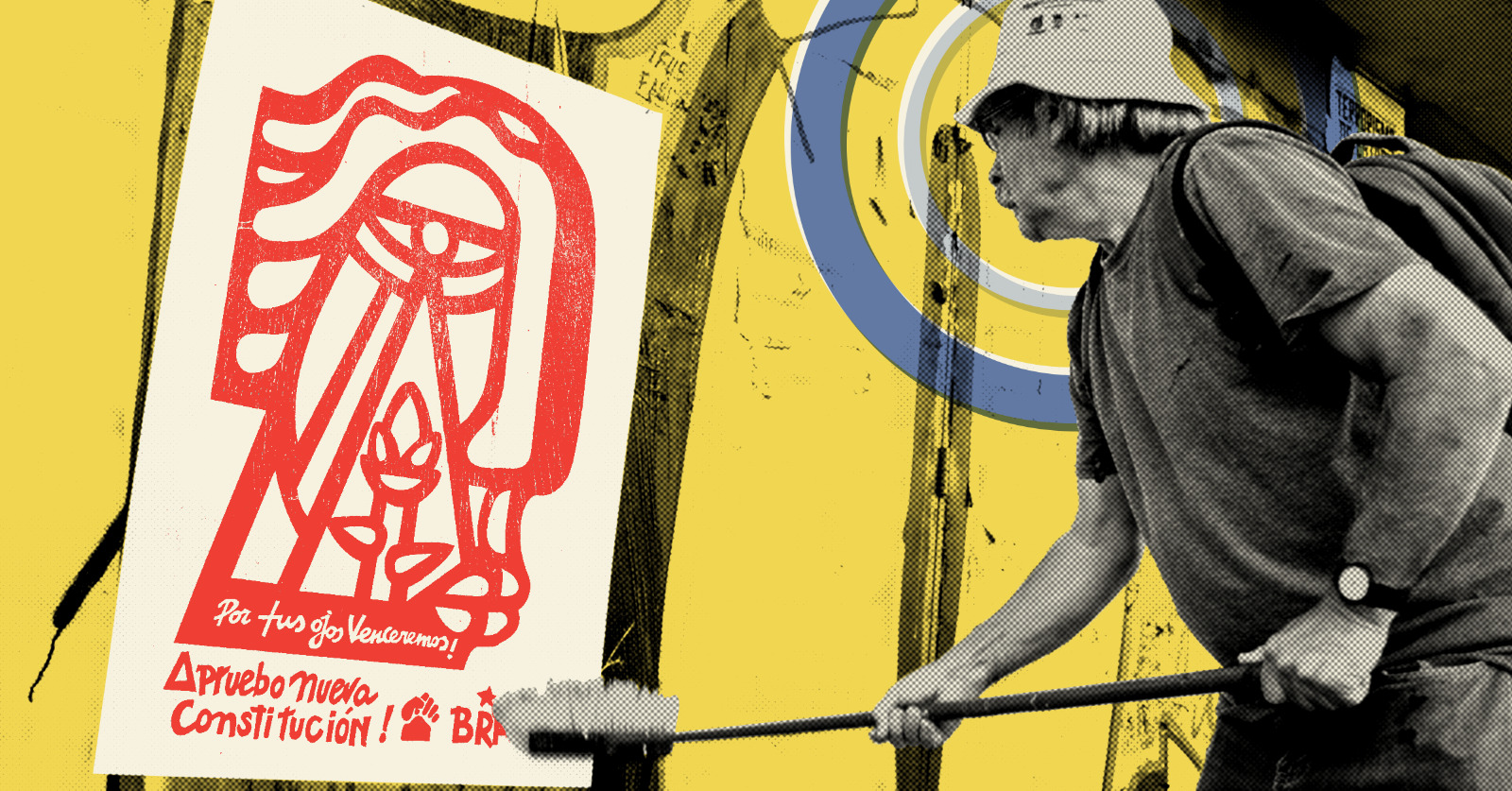