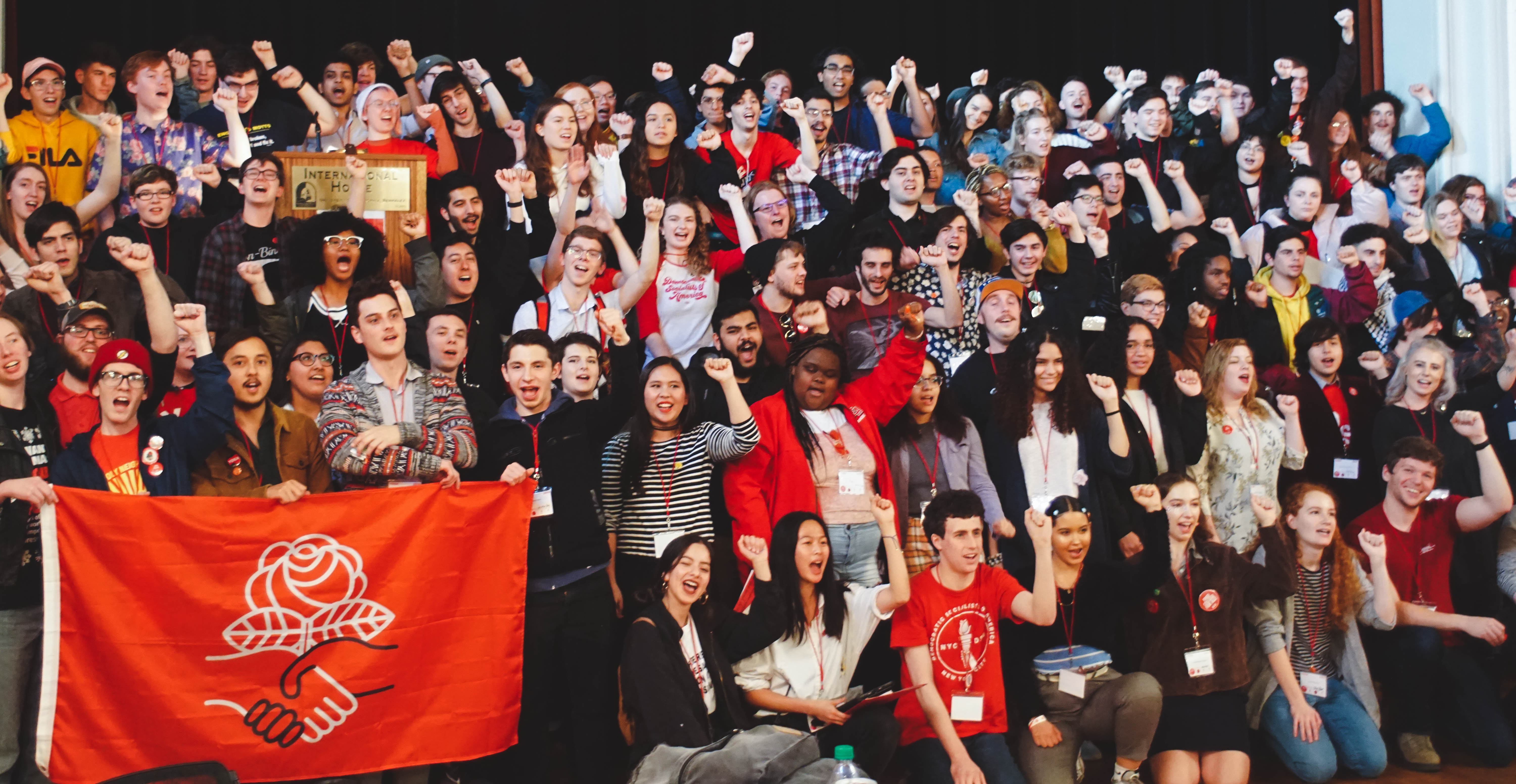 Posters around the room advertised the ongoing unionization campaign at San Francisco’s Anchor Brewing Company and red YDSA buttons dotted sweaters and bags alongside green and yellow ones that declared “I Stand with Oakland Teachers!” Volunteers from East Bay DSA handed out slices of vegan pizza and checked in roughly 160 YDSA members and future members from 45 colleges and high schools around the country.

The conference organizers could not have had better timing. As YDSA members prepared for plenaries about building a socialist movement through strikes, revolutionary reforms, and class-struggle elections, Oakland teachers were preparing to strike, and Bernie Sanders — as we found out on Monday — was preparing to launch his presidential campaign.

On Friday night, Jeremy Gong of East Bay DSA told the assembled students, “This weekend you’re going to hear from organizers around the country and around the world about exciting campaigns they’re working on. You will learn a lot from each other and make friends. Maybe some of you will even make some dank memes.” This got a laugh from the audience, but it was clear to everyone in the room that there was much more at stake than memes.

It’s hardly an overstatement to say that this conference felt historic. And in fact, it’s part of a long and sometimes fraught history of student socialist organizing. In the first of several speeches by members of the YDSA National Coordinating Committee (NCC), co-chair Eliott Geary (University of Tennessee-Chattanooga) called upon the history of the Students for a Democratic Society, citing its unwillingness to commit to the rank-and-file strategy (which YDSA adopted as a priority at its convention last summer), and its ultimate separation from organized labor as a key reason for its failure.

But times have changed, and it seems that today’s young socialists are seriously reckoning with the failures of the past as they’re looking toward the future. Amelia Blair-Smith, an at-large NCC member from Carleton College in Minnesota, spoke urgently of the need to build a mass party of the Left and for student socialists to look beyond their campuses and orient themselves to the working class. Co-chair Ajmal Alami quoted Lenin’s statement that “social democracy is the merger of the worker movement and the socialist movement,” before declaring that “each and everyone of you are the party builders of the future to get us to a mass party and finally win socialism.”

This revolutionary spirit lingered well into the next day, as the conference kicked off with “Socialists in Office: What Would Bernie 2020 Mean for YDSA,” a panel featuring David Duhalde (Our Revolution), Tascha Van Auken (NYC-DSA), Meagan Day (Jacobin), and Jack McShane (East Bay DSA). It was moderated by NYU YDSA member and YDSA Labor Committee chair Nina Svirsky, who pointed out “how exciting it is to have this many high school and college students talking about socialism at 9 in the morning on a Saturday.”

Exciting, yes, but perhaps not surprising, given the tremendous surge of interest in socialism in young people since the 2016 Sanders campaign. The panelists discussed what a Sanders presidency might look like, the role that class-struggle elections play in raising expectations for working people, and how Bernie 2020 can act as a “gateway drug” to democratic socialist ideas.

If the workshops were any indication, the movement is in great hands. Topics included electoral organizing, organizing a College for All campaign, building a mass organization, the university and the organizer, defeating the far-right on campus, student-worker solidarity, leadership development, and winning Medicare for All. Attendees shared their experiences with organizers from campuses around the country and learned valuable organizing skills.

The lessons continued with the second plenary: “Class Struggle in Session,” where NCC members Ajmal Alami and Sebastian Uchida-Chavez (City College of New York) were joined by international student leaders Camile Godbout of Québec Solidaire and Matt Meyers of the U.K. Labour Party in a discussion of the relationship of student and worker movements and how socialists can respond to the current crisis in education. Meyers argued that not only should students serve as tribunes for the working class, but they should think of themselves as part of it — and, in keeping with the theme of raising expectations, was greeted with cheers for proposing a student wage as a socialist demand.

A high point of Saturday was when news broke that the Oakland Education Association (OEA) had announced that it would strike on Thursday. The attendees erupted in cheers and chants of “Bread for Ed!” and “Strike!,” generating an energy that mounted throughout the day. Jovanka Beckles, Richmond city councilmember and former candidate for California Assembly district 15, delivered the first of two electrifying keynote speeches, declaring “I am prouder than ever to be a democratic socialist.” Beckles may have narrowly lost her campaign, but, as she told the audience, it was a win for working-class power. A class-struggle campaign like hers “diagnoses the root of the problems working people face, names the enemy, and unites working people together against that common enemy — the wealthy few who obtain profit from the hardship and pain of the many.”

Beckles closed her speech with cheers of “When we fight, we what? — We win!” and “that beautiful union clap” — then Cecily Myart-Cruz, vice president of United Teachers Los Angeles (UTLA), took the stage. Myart-Cruz’s speech was a powerful endorsement of militant social movement unionism, underscoring the need for anti-capitalist, anti-racist militancy in the labor movement. She also highlighted the importance of student organizing against racist “random-search” policies during the recent UTLA strike. Near the end of her speech, Myart-Cruz addressed attendees directly: “You all are not the future — you are the present. Because you are the present, we need you to lead — we need you to lead boldly like you have never led before.” And when the third and final plenary began on Sunday, it was clear that she was right.

The “Fire from the Rank and File” panel featured seven Oakland high school students alongside art teacher and East Bay DSA member Hannah Klein, OEA teacher Tim Marshall, and East Bay DSA Labor Committee co-chair Ashley Payne. In the weeks leading up to the OEA strike, these high schoolers have been planning teach-ins, dance parties, and walkouts in solidarity with their teachers, and in general putting us college-aged socialists to shame with their on-the-nose analyses of what’s going on on the ground. Kimberly Wong, a senior at Oakland High School and creator of the strike Instagram account @OakStudentsRising, addressed the crowd and said, “Strikes are our last option. It’s becoming necessary. We must plan and organize students to show the district we aren’t afraid of them, that we won’t be pushed around, that we won’t settle for less.”

Also in attendance were Denver high schoolers Alessandra Chavira and Jhoni Palmer, two of many incredible young leaders at the forefront of the labor movement. Thanks to their experiencing a mass strike wave firsthand, coming to political consciousness during the first Bernie campaign and witnessing the decay of the public high school system up close, these high schoolers understand clearly where the hole in the ceiling comes from — not just a few bad policies, but capitalism itself — and they’re already organizing to change it. At the conference, they were able to get in touch with students from around the country who are emerging as leaders in the Red for Ed movement. YDSA, as the largest student socialist organization in the country, has a unique ability to create networks that facilitate this kind of exchange and to provide young organizers with the tools and analysis they need as they grow into militant socialist leaders. This weekend showed that the kids are more than alright — they are ready to fight the scourges of capitalism and lead us to a better future. In the words of Jhoni and Alessandra, “Capitalism, watch ya back sis!”

Why DSA’s Next Convention Should Be Held in Person
Ian M. and Connor Willis
| August 12, 2022
Bryanna Dixon

Bryanna Dixon is a DSA activist in New York City.