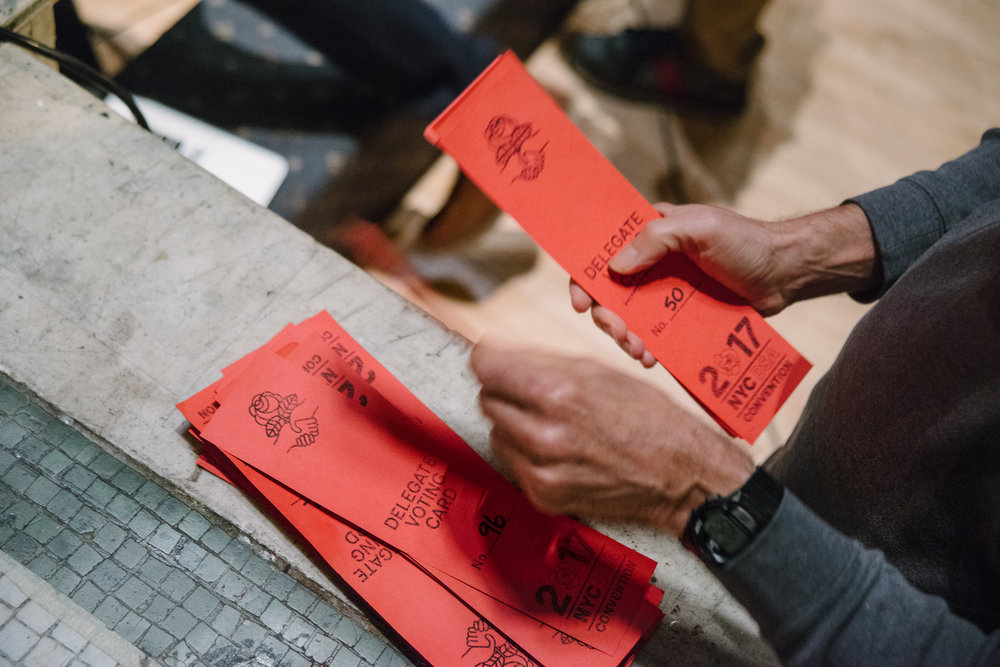 If you like this piece, read more about where we stand and our take on DSA’s tasks for 2019 — and sign up to get our occasional email bulletins.

This August nearly a thousand representatives from hundreds of DSA chapters will come together to set DSA’s priorities and perhaps significantly alter our structure. In addition to comradely political discussion and collaboration, the resolutions and amendments we choose to consider will be what makes the convention a success.

As we prepare to decide what kinds of resolutions and amendments to put on the convention agenda, we’ve compiled seven guidelines to help delegates think through all the options.

1. What makes a good resolution?

A good resolution has a clear goal with an associated plan and outlines any budgetary needs or other asks from the national organization. A good resolution can be turned into action the next day. Specific goals makes the intent clear, specific asks compel the organization to provide resources, and a carefully considered plan helps guide chapters with implementation.

2. What makes a bad resolution?

If a resolution would result in a weaker national organization, puts up ill-considered barriers to membership, doesn’t have democratic oversight, or focuses on internal dynamics for no clear reason, then consider it a poison pill for DSA.

Political realities require strength in numbers and solidarity of action. When people think about DSA, they think about core issues like Medicare for All, abolishing ICE, raising the minimum wage, and building union power. They also think of our support for Bernie Sanders and our important electoral wins. A bad resolution does nothing to move people to class struggle or to confront the power of capital in our lives. A bad resolution weakens our ability to empower the chapters to move in concert as a show of political force.

But mainly, a bad resolution can’t answer what it has to do with socialism. For example, we engage in electoral politics strategically, not because we believe we can vote socialism into being. We do campaigns because we believe they can bring people into the struggle and broaden public appeal, not because the realization of Medicare for All means we’re done organizing for healthcare justice. We strengthen the organization not to empower a hierarchy for its own end but to empower accountable and elected leaders to move a nationwide socialist organization in concert and to provide local chapters with the tools they need. The decisions we make in August should further these principles and put DSA on a path to become a formidable political movement capable of handling thousands of chapters and millions of members. Think big!

3. Why are campaign-focused resolutions important?

Resolutions that outline specific campaigns (like Medicare for All) should be at the heart of the convention. Campaign work is essential to building movements. Resolutions for specific campaigns force proponents to think about our political context and climate and to consider what we need. They force proponents to consider how the campaign builds socialist power, strengthens labor, weakens capital, democratizes institutions, or any combination thereof.

DSA campaigns should accomplish many things at once: move people to struggle for their own needs and self-interest, train people how to organize, educate us politically, bring in new members, and directly confront the power of capital over the working class. Look for resolutions that do that.

4. What should we expect from bylaws and constitutional amendments?

Amendments should grow DSA outward, help smaller chapters (with finances or other tools), make communication easier/more transparent, or build our capacity to carry out campaigns. To make the national organization more democratic and accountable to chapters, amendments should strengthen its ability to support chapters carrying out the campaign priorities with the resources they need. Look for ones that increase staff thoughtfully, make it easier for members to access resources, increase small chapter dues-sharing in an equitable way, and embolden DSA to be a political force.

Bylaws are the bones of an organization and should be just enough to allow it to function. We shouldn’t try to legislate through bylaws.

5. What does it mean to think “strategically” about resolutions?

It means that we take political strategy as seriously as the capitalists do.

When we consider resolutions, we should think about whether they are preparing DSA to be a much larger organization that can move in concert, that can be ready to mobilize tens of thousands of people, that broadens membership, and that makes chapters strong. Think about what DSA will need in five years, or ten — how large do we want to be? How do we want to exert political pressure? What do we need to do to broaden our power? It took the right wing in this country decades to undo labor’s gains. They had a plan and they executed it.

For resolutions seeking to “fix” DSA, we should be asking, what problem is this solving and is it a problem that needs solving — or one that can be solved through a resolution? If so, is this an efficient, sustainable solution?

Because we must prioritize, anything we consider should solve a very obvious and widespread problem and should do so in the spirit of making DSA more democratic, with accountable leadership.

Consider how enforceable the resolution is, and what it might lead to. Are we redefining what membership means? Why? How? Are we moving resources away from one thing and toward another — and is it worth it? What is the oversight? What is the consequence for a lack of action? What would carrying out the resolution look like locally and nationally?

Ultimately, the national convention should move DSA to become bigger and stronger. By “bigger,” I literally mean just that: making more socialists. By stronger, I mean a scalable organization with structures in place both to cater to the needs of chapters and to move the membership in a coordinated fashion.

Waleeta Canon lives in Chicago with her partner and two kids, serves on Chicago DSA's steering committee, co-hosts leftist feminist podcast Season of the Bitch and spends her days writing software. She is a member of Bread & Roses caucus.