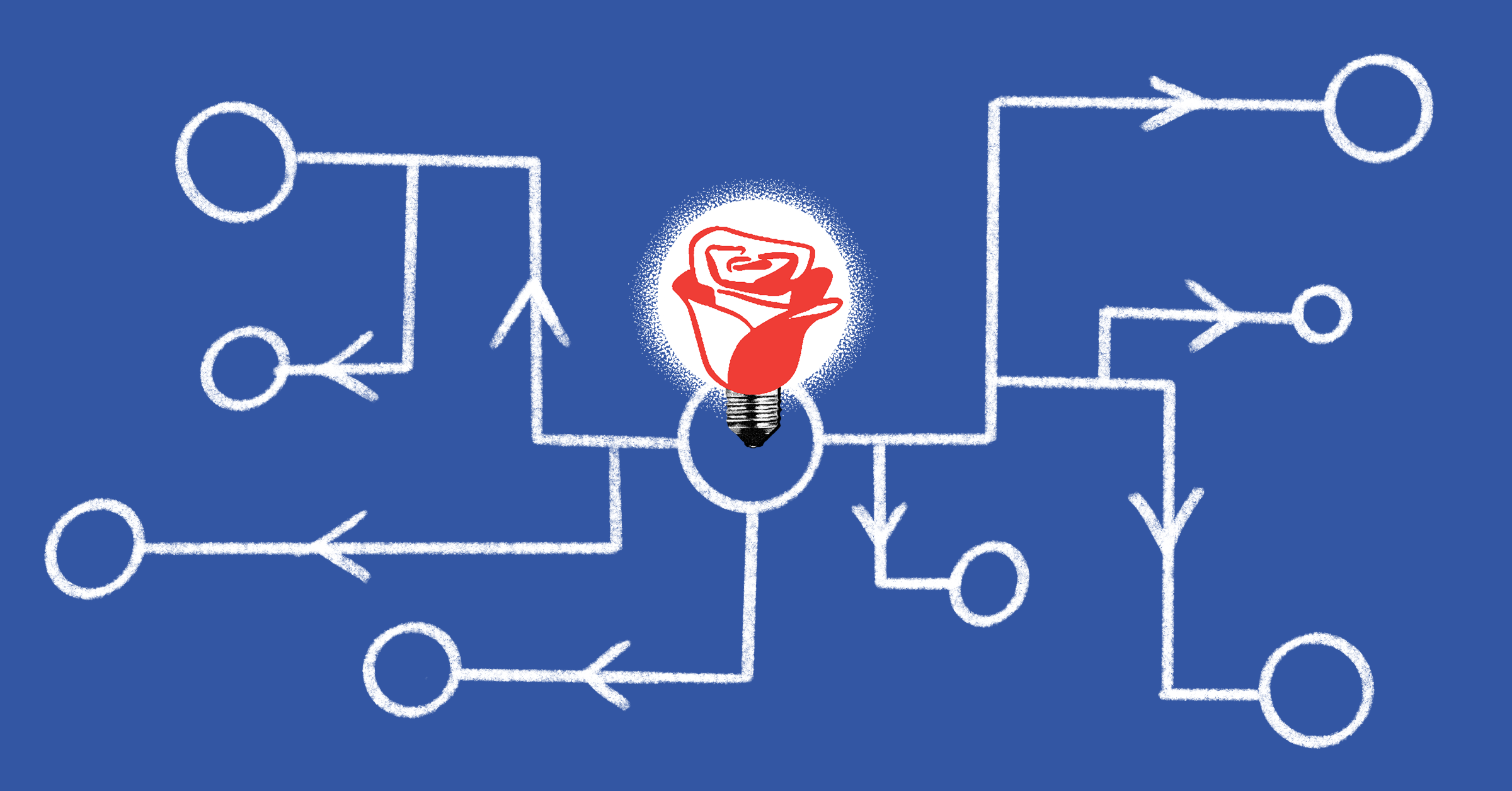 The 2021 DSA National Convention is an opportunity for the socialist movement to reflect on our work of the past two years and to set the agenda for our next two years of organizing. While the outward-facing political decisions we make at this year’s convention will shape the future of our organization and the socialist movement in the United States, many of the most heated debates will focus on organizational proposals aimed at addressing the infrastructure of DSA chapters and the national organization itself. We should consider these “organizational proposals” keeping in mind what decisions will make DSA most able to conduct successful, outward-facing organizing work in the years to come.

Bread & Roses has introduced several organizational proposals in our 2021 convention platform that would help build a strong DSA national organization. Such an organization would provide necessary support to all chapters and democratize our leadership structures in order to build accountability and open leadership to all members— rather than those who can self-select for our highest positions.

We Need A Strong National Organization

The socialist movement has experimented with many organizational forms over the last couple centuries, leaving us today with a plethora of lessons. A popular movement philosophy in the decades between the 1960s and Bernie Sanders’ 2016 campaign insisted upon a horizontal approach: wary of leaders, these movements resisted attempts to build any structures which could squash individual passion and energy among members.

While based on admirable intentions, such horizontal organizing often resulted in a “tyranny of structurelessness” in which informal organizational structures failed to stand up to the difficult tasks of organizing. Without formal mechanisms of accountability, these movements came to be dominated by strong-willed individuals, and members of these movements found themselves without formal process for ensuring wider democratic control.

While some members have been reluctant to embrace a turn towards stronger organization, the 2019 convention settled many questions around embracing a strong national DSA, and it seems unlikely the 2021 convention will have us turn back. DSA members will approach organizational debates in 2021 with a majority consensus on the necessity of a strong organization at the national level. What form this will take is up for debate at the convention.

Fortunately, many proposals from national campaign committees and other national bodies reflect this consensus view, such as the Beyond 100K resolution. This resolution would further the Growth and Development committee’s efforts to provide mentorship to chapters in regards to recruitment, undertake dues drives to ensure our organization remains well funded, and create a training infrastructure on a national scale to provide comprehensive assistance to organizers seeking to apply these skills at the local level. The resolution also commits to recruiting BIPOC organizers to close the racial gap in our organization — a necessary step in building a truly multiracial working class movement. For these reasons, we are happy to support this resolution and thrilled to see that it has widespread support among delegates.

One of the primary reasons it is so important to have a strong national organization is to provide the support infrastructure that many chapters — especially small or newly organized chapters or chapters in places where socialist politics are more marginal — are not yet able to build on their own. But even our largest chapters, such as NYC DSA, can’t do everything on their own. We all rely and benefit from the support and solidarity of a national organization that can carry out the administrative tasks which would overwhelm our volunteer leadership if they fell entirely on our shoulders.

It is vital for DSA to embrace organizational practices which don’t just build DSA’s organizational capacity for its own sake, but do so for the purpose of supporting our chapters at the local level and making them stronger. Resolutions authored from a broad consensus, such as the labor, electoral, and Beyond 100K resolutions, provide concrete steps in developing the infrastructure on a national scale to support and strengthen chapters. Bread & Roses has also authored two resolutions which we believe will help strengthen our organization from the bottom up.

The first is a resolution to strengthen YDSA, which would give our youth section the resources and decision-making authority it needs to continue growing. It would also implement a mentor program that facilitates the founding and support of YDSA chapters at high schools, community colleges, and universities where working class students are organizing. This proposal links DSA and YDSA — a necessary step if we want to ensure that we successfully grow and organize at the youth level and develop the next generation of socialists.

The second resolution establishes a matching funds program which will provide support for chapters to rent office space and hire staffers needed to scale up and strengthen our local organizational work. Matching funds will help chapters build strong, grassroots fundraising operations and the capacity needed to scale up outward-facing work on labor, electoral, and campaign organizing. We are particularly excited about the matching funds proposal because it will provide the most assistance to small and mid-size chapters like our own in Louisville.

Some delegates have expressed concern that matching funds could go to larger chapters. We should note that all chapters need support and that the success of our comrades in our largest chapters is a victory for us all. But the NPC can and should use this resolution to prioritize directing resources primarily towards those chapters that are starting up or struggling. We can attest to the value of an office space for smaller chapters — Louisville DSA managed to fundraise enough to rent a shared office space in 2018, and it dramatically increased our ability to organize. The Louisville DSA office space has allowed us to build up a store of supplies to make basic work like canvassing easier, and has given us a consistent physical launch site for those activities. The office has also allowed us to easily schedule more public events, political education sessions, and planning meetings and therefore scale up operations. Finally, a consistent office space has given the chapter a “safe haven” for organizing that we have meaningful control of; our events at public locations for a time were beset by (at times physical) harassment from Proud Boys—but we were able to kick them out of our office no questions asked and once they left us alone we could once again meet anywhere. We think every chapter should have this kind of infrastructure and hope to see every chapter build a plan to get it in place.

Workers Must Lead Our Movement

As we build a strong national organization which supports bottom-up organizing, we need to likewise consider the top leadership of DSA and how they relate to ordinary members. Our leaders need to be representative of and accountable to the membership of DSA. This belief has motivated Bread & Roses’ proposals to ensure working class members can be a part of leadership by providing stipends to members of the National Steering Committee, the group within the National Political Committee that is charged with more day-to-day decision making and work between quarterly NPC meetings, and to democratize leadership by electing the top position of our organization, the National Director.

A movement of, by, and for the working class must be led by workers — and this means our top leadership positions should be open to workers who otherwise would not be able to sacrifice the time and money needed to organize on the NPC Steering Committee. By establishing a $2,000 per month stipend, we can remove the financial barriers for our top leadership positions. Our resolution recognizes that the functioning of the entire organization relies on the administration of the National Steering Committee responsible for overseeing and helping in the work of over 94,000 members. Stipends will prevent burnout and ensure that our national administrative work is carried out by democratically elected and accountable figures.

Democratizing the leadership of our organization also means that our highest, most visible, and most influential decision-maker in DSA should be elected by the broadest constituency possible. Bread and Roses has put forward an amendment to DSA’s Constitution to elect the National Director for a two-year term at each convention. The National Director is the most visible role in our organization, our substitute for a “party leader” or similar position that would exist in slightly different organizational formations. The power to speak for the organization, to direct our staff, and to make executive decisions about budgeting and prioritizing work are inherently political decisions.

Contrary to objections that the amendment would politicize an apolitical role, it would instead demystify and democratize a role that is already highly political. How and whether the decisions of the convention are implemented often falls to DSA staff, who issue recommendations to our NPC. We should integrate the top staff leader into our elected leadership body given the National Director’s immense role in the final outcome of democratic processes. Electing this top staff position would also help to resolve the issue of the shadow veto — where the work voted on by the delegates of the convention and forwarded by the elected NPC is not carried out by the staff.

Our Plan for a Powerful DSA

These organizational proposals should be viewed in the context of Bread and Roses’ full platform for the 2021 DSA National Convention. Our Plan for a Powerful DSA seeks to strengthen the socialist movement’s organizational capacity to contest and win class struggle on the terrains of the workplace and the state. Rebuilding a militant, democratic labor movement; winning class struggle elections that put socialists in office; and rooting ourselves in the broader multiracial working class is how we will break out of the cultural margins where the socialist movement has existed for too long.

These organizational proposals help give DSA the tools needed to build a vibrant movement, one in which any ordinary worker can join our organization, build a strong chapter in their community, and participate in and ascend to our highest leadership positions through the democratic and accountable processes which start from the bottom-up.

We also need to elect a National Political Committee that takes the mandates of the convention and navigates the political terrain through 2023 with sound political leadership. Our Bread and Roses’ NPC slate consists of three organizers who have done just that. From Laura Gabby’s rank and file labor work in NYC DSA, Sofia Guimarães Cutlers’ electoral organizing in North New Jersey DSA, to Gilman Bagga’s administrative and recruitment work in Louisville DSA, our slate has built chapters of all sizes in different political contexts and can help guide our big-tent organization which is made up of all kinds of chapters and perspectives. By electing an NPC that knows what it takes to pursue campaigns that grow DSA and win victories for workers, we can ensure DSA becomes a powerful political home for the working class.

Why DSA’s Next Convention Should Be Held in Person
Ian M. and Connor Willis
| August 12, 2022
Gilman Bagga and Nick Conder

Gilman Bragga and Nick Conder are members of Louisville DSA and have served in leadership of the chapter in various capacities, including co-chair. They are both members of DSA's Bread & Roses caucus.